Remember how I used to do a weekly comic, for like, ten years and then stopped a few years ago? Well, I did another one, randomly. 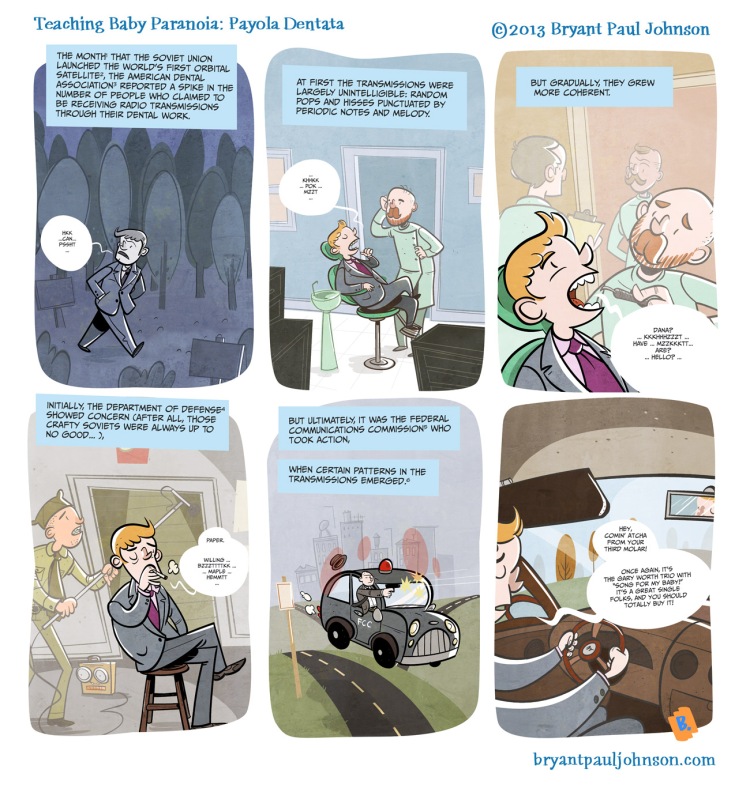 1: It was an October just like any other October. Minus the 180 pounds of Soviet metal leering down upon the United States like the unlidded eye of some supernatural villain.

2: Sputnik was launched on October 4, 1957 into an elliptical orbit some 139 miles (at its closest; 900 miles at its furthest) above earth. For three short months, it mesmerized us with its beeping and… uh… slight sky-traversing dottedness. On January 4th, 1958, it returned to earth, retiring to a government farm in Kazakhstan.

3: The American Dental Association was created in the 19th century to provide an institutional repository of dental knowledge. And also to house one of the strategic reserves of inexpensive lollipops.

4: The launch of Sputnik created the space-race, a wholly owned subsidiary of the arms-race (itself a wholly owned subsidiary of the Cold War). The Department of Defense oversaw all matters related to said Cold War, up to and including mysterious transmissions emanating from America’s dental appliances. Careful analysis of nearly 300 broadcasts determined that the dental transmissions coinciding with the launch of Sputnik were not a matter of National Security.

5: The Federal Communications Commission (herein referred to as the FCC) is mandated with shepherding the public radio, television, wireless and broadband spectra. In the 1950s, they prosecuted a number of radio disk-jockeys (so-called for their diminutive statures and colorful haberdashery) for what came to be known as the Payola Scandal. It turns out, where there’s the capacity to screw-over one’s fellow man to make a buck, there’s always the will: Disc-jockeys were accepting money to play particular records on their radiola programs in violation of radio spectrum licensing agreements. When caught they shifted to slightly less overt methods (radio stations owned by record companies; radio programs that are actually hour-long advertizements; third-party record-promoters…) that continue today.