Dropped Frames #6: Falling Empires–a brief history of war games, The Empire of the Petal Throne and the bifurcation of the games audience. 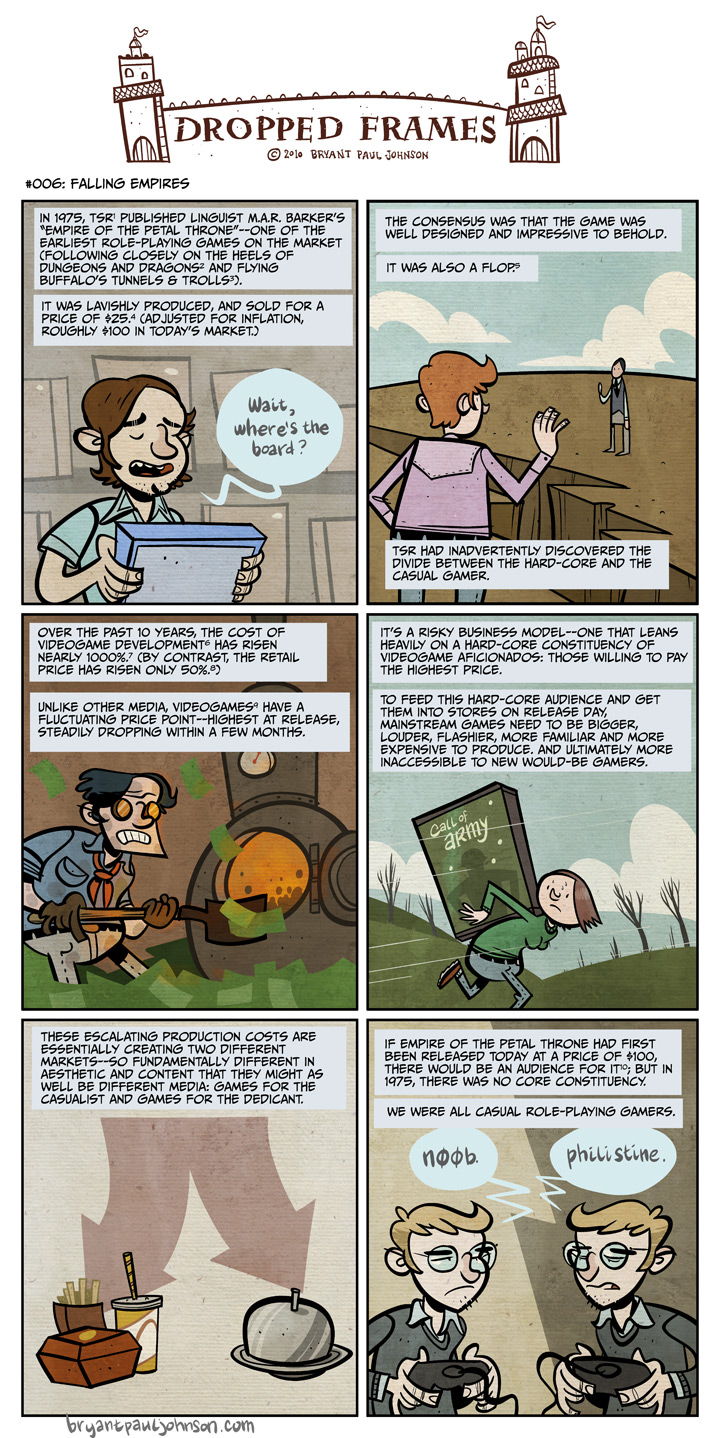 1: TSR, or Tactical Studies Rules was a company founded to publish Dungeons and Dragons, the first role-playing game on the market. On the verge of bankruptcy, it was purchased by Wizards of the Coast in 1997.

2: Dungeons and Dragons was the creation of Gary Gygax and Dave Arneson. It grew out of a medieval themed wargame called Chainmail. It was first published in 1974 by TSR.

3: In 1975, Flying Buffalo published Ken St. Andre’s game Tunnels & Trolls. It is widely considered to have been the second published role-playing game. Though thematically similar to Dungeons and Dragons, it diverged significantly in mechanics. There have been seven major editions of Tunnels & Trolls to date.

4: By contrast, Dungeons and Dragons originally retailed for $10.00.

5: It was only a flop for TSR. Empire of the Petal Throne (or Tekumel, as it is called today) has been in print, more or less continuously for 35 years.

6: Here, I am referring to mainstream, box titles–those you might expect to find on the shelves at your local GameStop. (Sometimes called AAA games–I am loath to call them that, as it seems to imply a certain degree of quality not always demonstrated in the products.) The last decade has seen the significant rise in a casual, and indie-games movement. These movements seem the result of the above, rather than part of the above.

7: http://www.develop-online.net/news/33625/Study-Average-dev-cost-as-high-as-28m It’s difficult to assign a simple metric in the changes in development costs. In 2000, the market looked different. Many productions focused on a single platform. Today, multi-platform development seems to be the norm.

8: http://www.msnbc.msn.com/id/3078404/ns/technology_and_science-games/ This article, at least several years out of date, show a bit of how the retail price has changed over the past decade. A quick look at new releases indicates that $60.00 is the norm.

9: Again, I am referring to mainstream, box titles. Massively Multiplayer, Casual and indie-games have their own pricing structures, with many eschewing a retail price entirely (most notably, social networking-centric casual games).