This was a talk I gave to a webcomics summer camp program at Smith Vocational High School a few days ago. I decided to flesh it out beyond my notes in the hopes that I’ll A: use it again and B: help others interested in making their own comics. Many thanks to Kevin Hodgson for inviting me to talk! The students were absolutely phenomenal: they were interested, engaged and despite the heat, eager to spend their summer day making comics!

If you’re reading this, chances are you’re at least marginally familiar with comics. You know, those pamphlets densely packed with boxes of tiny illustrations and colorful onomatopoeia; Or maybe they’re the black and white paperbacks you read from right to left at your local Barnes and Noble; Or the curiously immutable adventures of cats that talk, printed on that stuff you use to pack your dishes with when you move; Or the ribald, crudely drawn comics you troll on the internet, with your morning cup of coffee, as you will the brain into action.

What are the defining characteristics of a comic? A melange of the graphic and the prosaic interspersed in a sequential pattern. A narrative told through words, pictures and time.

Must a comic have all three? Well, yes and no. A comic can be missing components, though those missing parts are usually implicit; supplied by the reader through a prior understanding of the mechanics, iconography, body language and symbolism of the remaining aspects. So that I don’t need to keep typing “comics missing one or more of the mechanical constituent parts,” we’ll call them “demi-comics” (though not to imply that any of them are necessarily inferior!).

Pictures and Time; Comics without Words: There are many superlative examples of silent comics. (The Arrival, by Shaun Tan or La Mouche by Lewis Trondheim as recent examples.) The prosaic element of comics is conveyed through the clever use of the body language, framing and pacing; the reader interprets these visual signals and creates the words. In his book Understanding Comics, Scott McCloud extends the early history of comics to cave paintings, the narrative bas relief sculptures of the Classical Antiquity and the stained glass windows of Medieval Europe. In each instance, the reader (viewer) was familiar enough with the iconography to assign words to the sequence of pictures [and time]. Silent comics can be culturally specific: they rely upon a shared understanding of physiognomy, gesture and history. As such, the specific nuances of silent comics can be lost to readers alien to the culture of the creator.

Word and Pictures; Comics without Time: This combination (most often referred to as a cartoon) is the most common of these demi-comic examples. It’s the combination that we see in magazines (the New Yorker), on t-shirts and greeting cards, or in political cartoons. 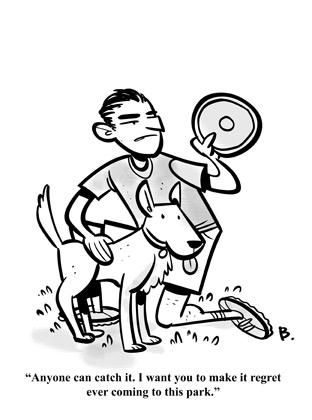 Why is the figure in the cartoon talking like that to his dog? Why is that public figure depicted wearing a hat and coated in oil? Because much of the narrative of a cartoon is left to the imagination of the reader, this is the category most often “misinterpreted.” In the case of certain comics (particularly those published in the New Yorker), puzzling out their meaning is part of the appeal.

Words and Time; Comics without Pictures: Perhaps the rarest combination of the three, and mostly experimental. Since words are the graphic representation of ideas, one can argue that words can be fulfill both the graphic and prosaic requirements of a comic. We see this in the expressive lettering of Walt Kelly, who used typography to add visual and textual information to his comic Pogo. A reader supplies the missing data (the pictures) from their understanding of the iconography of the type. Looking at the history of language, most evolved from simple pictographic representations of objects to metaphorical representations of objects and ideas. Over time, while we may have shed the literal meaning of the symbols we combine into written ideas, they still contain a certain primal resonance.

So, hey,  why isn’t this book considered a comic? We’ve talked about the three key elements that make a comic, so why isn’t an illustrated book [always] a comic? The three elements of a comic work in harmony to create something that is more than the sum of its parts (not to say that a comic is better than illustration, or prose; just different). Each part informs the entire narrative adding to the reader’s experience. In the case of an illustrated book, the pictures often exist as superfluous information: they’re there as decoration more than information. Consider this litmus test: if the illustration wasn’t present, would the story suffer? Could you still follow it? If the answer is yes, it’s probably an illustrated book. If the answer is no, chances are you’re holding a comic.

In many cases, what we might call a comic is referred to as an illustrated book (or a children’s book) for purely marketing reasons. Comics–for better or worse–have had a pejorative stigma attached to their name. They aren’t called comics because comics weren’t considered serious material.

That Harmony Between Words and Pictures Thing We Just Talked About: Comics are a remarkably powerful medium. A single panel can contain multiple levels of narrative information; as much, if not more than a similar acreage of prose. But, the trick is in the clever mix of the various components to elevate it above mere illustrated text (or captioned illustration).

The simplest way of thinking about this is: don’t draw what you’ve written, don’t write what you’ve drawn.

But Why? Two reasons, really. Both equally valid.

Tyger Tyger, burning bright,
In the forests of the night;
What immortal hand or eye,
Could frame thy fearful symmetry?

In what distant deeps or skies.
Burnt the fire of thine eyes?
On what wings dare he aspire?
What the hand, dare seize the fire?

And what shoulder, & what art,
Could twist the sinews of thy heart?
And when thy heart began to beat,
What dread hand? & what dread feet?

What the hammer? what the chain,
In what furnace was thy brain?
What the anvil? what dread grasp,
Dare its deadly terrors clasp!

When the stars threw down their spears
And water’d heaven with their tears:
Did he smile his work to see?
Did he who made the Lamb make thee?

Tyger Tyger burning bright,
In the forests of the night:
What immortal hand or eye,
Dare frame thy fearful symmetry?

In William Blake’s 1794 poem The Tyger, the text describes the author confronting the frightening image of a rare and deadly beast. It is a series of questions posed as to the origins of the creature.

On the metaphoric level, William Blake is pondering the whole of creation. Was this terrible beast created by a benevolent god; the very same that created mankind? And to what end?

Comics operate similarly. You can have multiple levels of meaning conveyed in a single panel by juxtaposing words and pictures. When you draw what you’ve written, or write what you’ve drawn, you’re depriving yourself of the ability to add additional meaning and nuance to your panels. 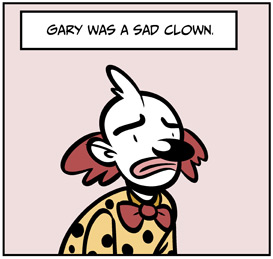 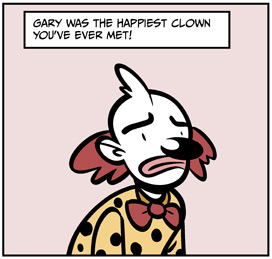 In the second example, the words don’t describe what the image depicts. The reader is left to ponder the discrepancies between the two, adding meaning beyond that depicted in either the words or the picture.

The Economic Reason A: Comics take a long time to make. What may take the reader a couple of hours to enjoy probably took months (if not years) to create. Finding the proper balance between words and pictures ensures that you are using your time and energy most efficiently.

The Economic Reason B: If you’re drawing a comic strip (of four panels, for example), you have a very finite amount of space to make your point. Using words and pictures poorly saps your finite space of their potential, and dulls the message conveyed.

How Can You Tell if You Are Using Words and Pictures in Harmony? Do you remember earlier when we talked about the litmus test for a comic vs. an illustrated book? The same applies here.

Look at your comic.

Now hide the words. Is the story the same without the words?

If the answer is yes, then you need to find a better balance. Try re-writing your comic and repeating the above steps.

Was that any better?

It’s a simple step, and may seem obvious, but it can help identify weaknesses in your own storytelling. Eventually, you’ll develop an innate sense for these sorts of things!

Anyway, no, of course not. Creating comics is an artistic process. You need to figure out the techniques, tricks and methods that best serve the story you are going to tell. I’d only suggest that you ask yourself if breaking these rules is the best way to get your point across. If the answer is yes, then go for it!

N.B.: A careful examination of my own comics will undoubtedly reveal a number of instances where I didn’t heed my own advice. In some instances that might have been deliberate; in others, poor execution or a simple mistake. I certainly won’t claim to understand everything about the craft of comics; even after fifteen years of making comics, I try to learn something new with every comic I make!

5 thoughts on “Finding the Balance Between Words, Pictures and Time in Making Comics”